You are here: Home / Lifestyle / Willy Update – Still Sick & Needs Surgery ASAP And How In Our Hands Rescue Of NY Makes Me Doubt Everything 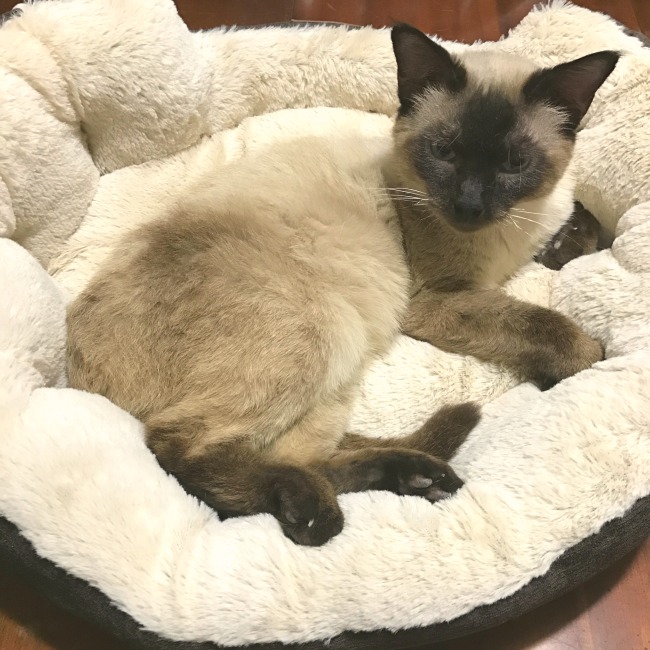 I was so touched by some of the comments, messages and tweets that I received about Willy that I thought I would give you all an update. If you didn’t read the first two posts, you can read how we welcomed Willy into our home here. Also, you can read about Willy’s first medical update and our terrible experience with In Our Hands Rescue of NY here.

Willy just finished a course of antibiotics. He’s also been getting an immune system booster for the last couple of weeks.The immune system booster has been pretty easy to give. I just sprinkle a scoop onto his can of wet food and mix it in. He eats the food and in goes the booster. The antibiotics were far more challenging. He didn’t like them at all. These antibiotics had to be given orally. Willy didn’t like them for a number of reasons. I’d guess the biggest reason he didn’t like them is because I had to hold his face to administer it. It was no surprise that Willy resisted, so I took to wrapping his paws in a blanket so I wouldn’t get scratched.  We finally finished the antibiotics early last week, something for which he and I were both grateful for. Hoping for the best, I took him in to see the vet for a recheck. 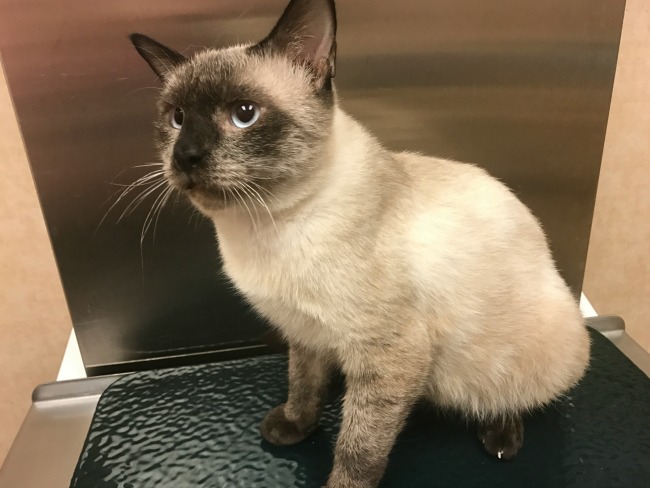 The first thing the vet did was weigh Willy. He had managed to put on a little bit of weight since the last visit, which I am guessing is somehow a result of the immune system booster since we haven’t changed the volume of his food at all. At under 8 pounds he had been a lightweight (in my opinion), so I was glad to see he was finally over 8 pounds. That was pretty much all of the good news I got.

Don’t get me wrong. The antibiotics had worked. They just aren’t enough to fight off the infection and mess that he’s got going on. Think of it as applying a bandaid to an amputation. It may help a little but it will not get the job done. The vet told me that the only way we are going to get to the root of the problem will be to do the oral surgery. Continuing to medicate won’t cure the problem. The only way to really take care of the problem is to do the oral surgery and remove everything on one side of Willy’s mouth. Now I did basically already know this so I thought that would be the only bad news. It wasn’t.

Willy has been having issues that cause abnormal breathing, wheezing and coughing. He sometimes sounds just like a baby who has croup. So, before going to the vet I made sure I was able to get all of it on video. First I showed the vet the video containing the wheezing sound. Then the next sound. And finally, I showed him the video with the croup sound. When Willy makes this croup sound he looks like he might have a hairball. But, nothing ever comes out. When the vet saw this on the video he said something that I hadn’t even thought of. The vet said when Willy had his oral surgery, he’d also like to take a look at Willy’s windpipe while he was under in order to get to the bottom of the croup-sounding cough as there might be a problem there. It’s a known fact that Willy received trauma to the jaw. The throat is in such close proximity to the mouth. You can do the rest of the math from there. I did and I just cried.

Take a listen to just some of the noises I hear every day.

I hear those noises every day. They are the noises of illness. They are the sounds of Willy’s infection and injury caused by trauma. Infection that cannot get out of Willy’s body on its own. I cry for this cat every day. It’s heartbreaking knowing someone could hurt an animal and cause trauma like he has. It’s disappointing, disconcerting and shameful that a rescue would let someone adopt this cat without having a vet check it and without disclosing the health issues and then refuse to help with the medical care for what is clearly a preexisting condition.

The vet’s office (Brick Veterinary Hospital) has been absolutely wonderful. I cannot say enough positive things about them. They have been super kind and compassionate, as well as patient while we try to deal with this awful situation. The vet had wanted to do surgery right away and scheduled it for tomorrow. The vet hasn’t able to estimate what the surgery is going to cost. This is understandable since they won’t know for sure what needs to be done until they get into his mouth. They were able to say that simple oral surgery starts at $400, but this isn’t simple and there may be more going on. The office I suggested applying for a $2,000 line of emergency credit, which I did and it was denied. As I mentioned in my previous post, we did get pet insurance as we adopted Willy. I chose to sign up with Figo because it looked like they offered a valuable service at a fair price. Unfortunately, treatments so far have been denied due to the illness and injuries resulting from a preexisting condition. I’m looking into canceling the policy, in order to save the money to pay for the treatments that haven’t been covered. In the end we simply cannot afford the surgery and I have had to postpone it to a yet undetermined date.

It is breaking my heart knowing that this cat needs medical care and we can’t give it to him in as timely of a fashion as he deserves. I hate that my beautiful cat is in pain and has to have painkillers. I want the rescue to stand up and do the right thing now. As I mentioned in my last update, In Our Hands refused to accept responsibility or even help.  This rescue has caused me to question everything and I hate that feeling as much as I hate watching my baby boy be sick. 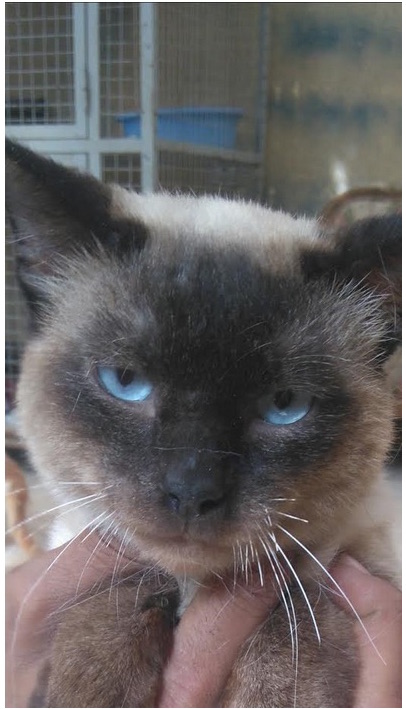 Above is the picture of Willy as it appeared on the Petfinder website. In Our Hands rescue said this animal was rescued from Cairo, Egypt. I was under the impression that the cat I was rescuing was well. The vet confirmed yet again for me that it is impossible for the trauma that Willy has to have happened recently. And anyone, with a trained eye like a vet or an untrained eye like me, can see that there is a problem. I don’t believe that any vet ever checked Willy out before he came here to the US. I don’t care that the paper I have says he got shots in April. Every vet always opens a cats mouth before doing almost anything else. I did try emailing the Esyptian Society For Mercy To Animals  in Cairo where Willy supposedly came from (their name is in the vet’s paper that I was given). My email asked about his background and time there but they did not reply. Furthermore, I know the rescue didn’t have a vet check Willy out when they brought him here because they admitted that to me.

All of this brought something else to mind. I coordinated with the foster person the day I picked Willy up. I drove quite a distance into Brooklyn to get him. I arrived 5 minutes early. Upon being greeted at the door I was told someone else was also coming to look at Willy and whoever got there or said they wanted him first would get him. Would a considerate and ethical person would let someone drive all that way and knowingly schedule someone else to come at the same time? No. I was there for a good half hour. Noone else ever came. In retrospect, I think they wanted me to think someone else was coming so I would decide right then. I don’t think there ever was a second person coming to look at Willy. I think they had a good inkling that something was wrong and they just wanted him adopted as soon as possible.

I have been researching online and found many other people with complaints about In Our Hands Rescue. On the Great Nonprofits site almost half of the In Our Hands Rescue reviews were negative. To me that says a lot.  There are numerous positive and negative In Our Hands Rescue reviews on Yelp as well. To that end I am planning on checking into the state laws concerning rescue animals and rescue organizations. In Our Hands is a 501c3 according to their website. I’d like to know who oversees their rescue and adoption practices and reach out to them. And I would also like the story to make its way to the media. This rescue need to be held accountable. I may not be able to get the rescue to help me cover Willy’s medical expenses financially, which only hurts Willy and my family. But if I can let the world know they need to be alert and avoid horrible and shameful experiences like this then I can, should and will.