You are here: Home / Lifestyle / A Willy Update – Illness And Our Experience With In Our Hands Rescue 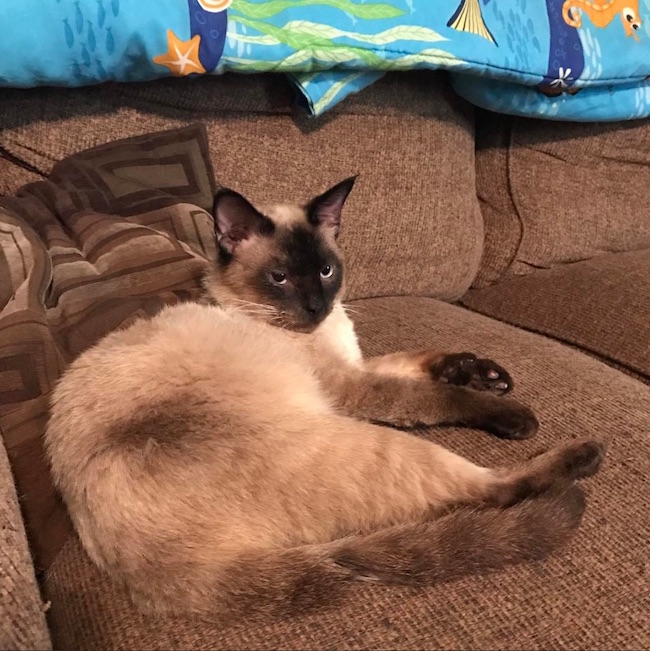 You may recall that we recently rescued a cat, and that we welcomed Willy into our family on April 22. He seemed to be settling in nicely. I noticed an occasional odd noise, and that his tooth occasionally caught on his lip, but didn’t make a ton of it at first, figuring every animal has their little quirks. We started getting to know him and it didn’t take very long at all until we were all madly in love with him. Wanting to be a good pet parent, I’d made an appointment with the vet for a well checkup. I wanted to establish a relationship with the vet for Willy, and to establish care for him. Also, I wanted to have him checked out. Considering I’d been told he came from Cairo just one week prior and was lucky to be alive, and considering what I read about treatment of animals there, I thought it the right thing to do. I did not expect to have anything major go wrong. I couldn’t have predicted what I was told if you told me it was going to happen because I wouldn’t have believed it.

Willy’s well appointment was scheduled for Thursday. Over the preceding weekend we grew to be a bit concerned because some odd breathing and a very distinctive cough that reminded me of a child with croup kept occurring. So the vet had us come in to the office on Monday May 8. I explained my concerns and asked him to check Willy out. I also asked him to confirm Willy’s age (I’d been told he was one year old) and that Willy had in fact been neutered, since the sparse medical paperwork I received didn’t have any definitive information on anything except a couple of vaccinations and even that wasn’t very clear.

One of the ways to estimate a cat’s age is to check their mouth. When the vet opened Willy’s mouth I saw him visibly look concerned and surprised. I was easily able to see right into Willy’s mouth myself at that point. As I looked directly into Willy’s mouth I heard the vet’s words echoing around my head. “This cat has suffered trauma to his head”. I knew what that meant in my head and awful images of faceless people doing horrible, cruel things immediately came to mind. I tried to stay strong and not to cry, failing and finding myself once again crying in the vet’s office.

The vet said that all of the damage in Willy’s mouth was bad, red as the reddest ground meat you can imagine. He had a really bad infection in his mouth, where he had been abused. Continuing with the exam, the vet discovered that the infection was not limited to Willy’s mouth. He also had a bad infection in one of his ears (same side as the mouth injuries and infection) and an upper respiratory infection. Apparently like with people, the mouth and nasal passages of a cat are connected. And that wasn’t the worst of it. I was told that the damage in his mouth was beyond repair, and that Willy would require extensive oral surgery, and that he would likely lose everything on the damaged side of his mouth. The first step was to start dealing with the infection. If not treated, the infection could spread and Willy could get even sicker. To that end, the vet prescribed oral antibiotics and medication for his ear. The vet also confirmed Willy was likely in a degree of pain, so he prescribed a painkiller as well. The vet did confirm Willy was neutered, and estimated him to be approximately two years old. The age did fit with what little I could see on the paperwork the rescue had sent.  The visit to the vet that day cost $306.18. I was told the oral surgery alone would start at $400-500 and that they wouldn’t know how expensive it would actually wind up being until they had Willy under and were able to get into his mouth. My mind reeled at the information I’d been told and my heart hurt for my poor baby. I took him home and set about the job of trying to keep him comfortable and getting the medication in him so he could get well.

Once home, my mind was overrun by concern for the pain Willy was in, and concern for how we would be able to afford to get Willy the care he needed. I decided to reach out to In Our Hands Rescue of New York, which is who we adopted Willy from. I sent a detailed email explaining what was going on. I included copies of the receipt from the visit to the vet’s office.

(Please click on an image if you need to see it in a larger size.)

The rescue sent a reply that surprised me.

I know words can be misinterpreted, but I took the “believed to be injured” portion as an insult and that they doubted me. “As I saw from the vet records”?! There weren’t any records of anything except a couple of shots! And those records were barely legible! Cannot guarantee health? All they had to do was open his mouth!!! He’d only been in the country for one week according to them and it was obvious the injuries and infection was raging rampantly in his mouth, it wasn’t new so he either had it when they got him or it happened when he was with them. It didn’t happen when he was with me. And I couldn’t believe my eyes, return Willy? No way! We’d already fallen in love with him and the last thing that this poor cat needed was to feel abandoned. So I replied again.

To which they replied what I perceived as a placating response.

So according to my understanding of the English language, this is what I got from our email exchanges.

I had to take Willy back to the vet this past Friday May 12. He did not seem to be improving as we’d hoped he would, and in some ways seemed to be a little worse. The visit cost us another $225.53. The vet did an xray and was able to thankfully confirm that the infection hasn’t gotten into the lungs and caused pneumonia yet. The vet suggested we change antibiotics, and that we add something to his food to boost the immune system.

I love the vet and know Willy needs the care. But unfortunately we cannot afford to go back again anytime soon, we must pay our other bills. So now we have to literally pray that Willy starts getting better. And we have to pray that we can figure out a way to somehow come up with the money for the oral surgery.

I adopted Willy with the implied understanding he would be in reasonably good health. I don’t consider $700+ in the period of a week plus at least $400-500 minimum still to come reasonable expenses. I don’t feel the rescue should have let any animals from there be adopted until they had been checked out here. I mean, clearly the standards of ethical treatment to animals varies greatly between our two countries. (And for the record, I did try to reach out to the agency in Egypt via their Facebook page but they didn’t reply to my message.)

I had actually gone to the trouble and expense of signing Willy up for pet health insurance, in case he got ill after we adopted him. I wanted to be prepared in case the time ever came where we had to use an emergency vet or contemplate expensive procedures. Sadly, the current problem is considered a pre-existing condition, which the policy does not cover. 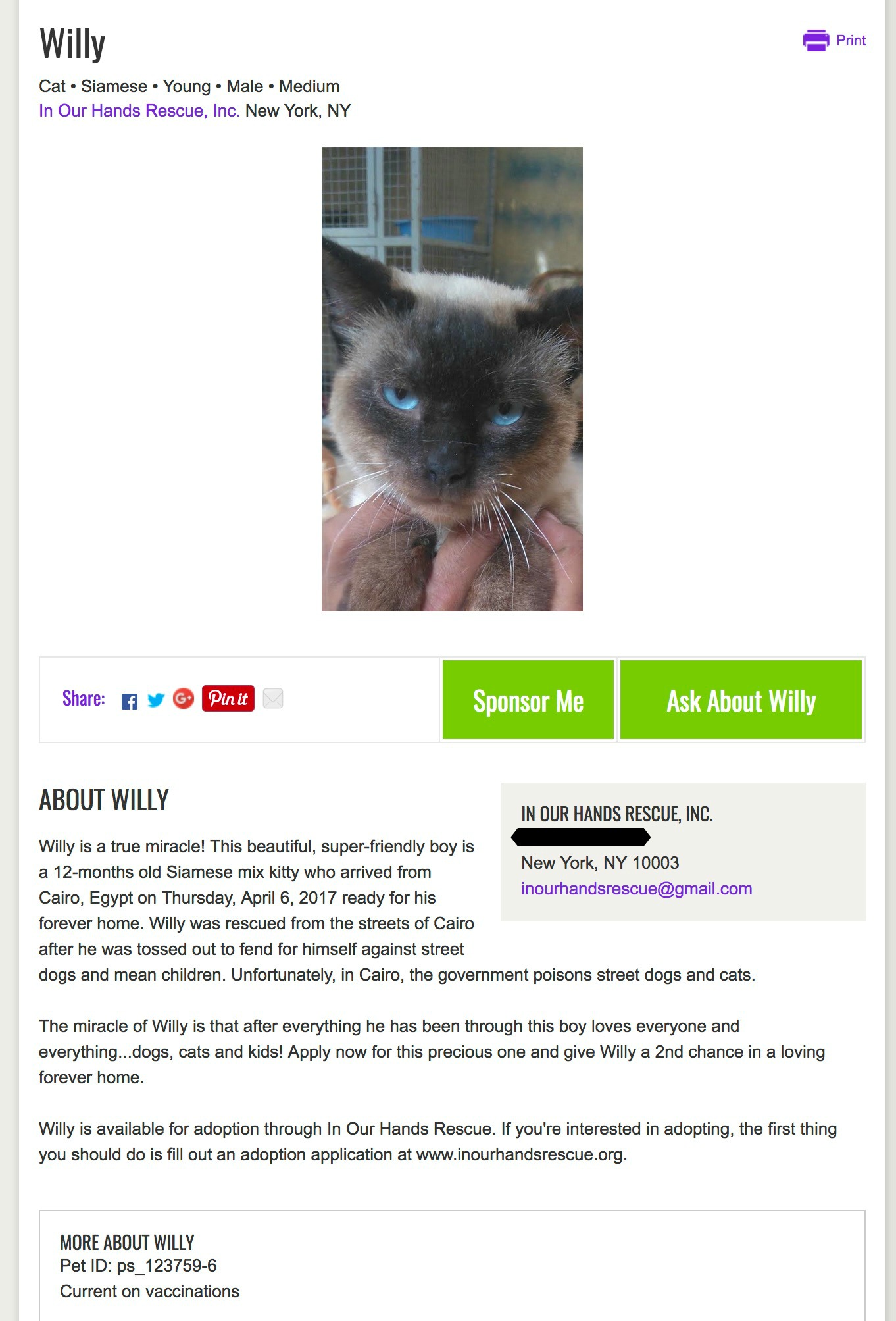 This whole situation doesn’t make sense. I love Willy and have no intention of giving him up. But I did have the right to know that there were or could be major medical issues, so I could choose whether or not to adopt him knowing how expensive treatment could be. Now I feel brokenhearted knowing we cannot get Willy the oral surgery because we simply cannot afford it. So my baby has to deal with the pain until we can figure something out. It’s heartbreaking. This poor cat has been through enough already and deserves to sit in his new bed and feel content and safe and healthy.

The In Our Hands Rescue claims they will help animals anywhere. They state that their desire to help animals in need is not defined by geography. They were even featured on WPIX11 a few weeks before I adopted Willy. I am sure that they do actually want to help animals on one level. I am also a bit sure they saw me coming from a mile away, me and my tale of sorrow of how I’d just had to unexpectedly put Jules down, and they happily charged me double their advertised going rate. That’s right. Double the rate listed on their website. And never once checked my references.

So why am I writing this? Because I felt I needed to share this experience. I would have never thought we’d wind up in this position. I would have asked other questions and made my decision based on those answers. I am angry and disappointed that the rescue will not help in any productive and meaningful way, and that they have refused to help with the medical costs. But even more than that, I am afraid other families that rescue a pet brought over from another country from this agency will find themselves in a similar situation to the one we are in. I adopted Willy because I was really missing having a cat and I hoped he could save me from the heartbreak of missing Jules. As it turns out, it looks like we’re saving each other. People are supposed to feel good about working with a rescue and adopting a pet. This experience has left a really bad taste in my mouth regarding rescues. You can bet if I ever find myself considering rescuing an animal again I will be a lot more cautious.

Please check into who you adopt a pet from. If adopting a pet, please confirm the animal has been checked by a vet recently and ask to see that paperwork. And finally, please be sure to ask any question that crosses your mind, no matter how minor it may seem. If a rescue can check we as potential adopters out then we should be able to check them out. I’m sharing my story so if someone is checking this rescue out they’ll know to be very careful.