You are here: Home / Announcements / Screen It Sunday

I’m frequently sent information on upcoming television, DVD/Blu-ray and movie news. I’ll be compiling and sharing the best and most interesting news with you here each week. 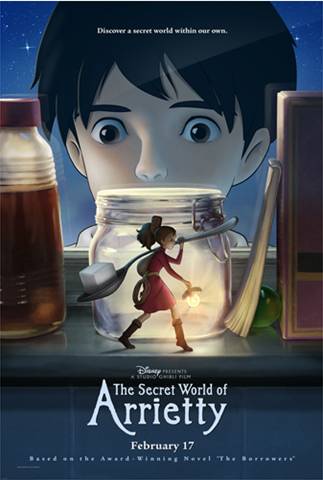 Residing quietly beneath the floorboards are little people who live undetected in a secret world to be discovered, where the smallest may stand tallest of all. From the legendary Studio Ghibli (“Spirited Away,” “Ponyo”) comes “The Secret World of Arrietty,” an animated adventure based on Mary Norton’s acclaimed children’s book series “The Borrowers.”

Arrietty (voice of Bridgit Mendler), a tiny, but tenacious 14-year-old, lives with her parents (voices of Will Arnett and Amy Poehler) in the recesses of a suburban garden home, unbeknownst to the homeowner and her housekeeper (voice of Carol Burnett). Like all little people, Arrietty (AIR-ee-ett-ee) remains hidden from view, except during occasional covert ventures beyond the floorboards to “borrow” scrap supplies like sugar cubes from her human hosts. But when 12-year-old Shawn (voice of David Henrie), a human boy who comes to stay in the home, discovers his mysterious housemate one evening, a secret friendship blossoms. If discovered, their relationship could drive Arrietty’s family from the home and straight into danger. The English language version of “The Secret World of Arrietty” was executive produced by Kathleen Kennedy and Frank Marshall, and directed by Gary Rydstrom. The film hits theaters Feb. 17, 2012.

Academy Award®-winning Best Animated Feature “Finding Nemo” returns to the big screen for the first time ever in thrilling Disney Digital 3D™. In this stunning underwater adventure, with memorable characters, humor and heartfelt emotion, “Finding Nemo” follows the comedic and momentous journey of an overly protective clownfish named Marlin (voice by Albert Brooks) and his son Nemo (voice by Alexander Gould)––who become separated in the Great Barrier Reef when Nemo is unexpectedly taken far from his ocean home and dumped into a fish tank in a dentist’s office. Buoyed by the companionship of Dory (voice by Ellen DeGeneres), a friendly-but-forgetful Pacific regal blue tang, Marlin embarks on a dangerous trek and finds himself the unlikely hero of an epic effort to rescue his son––who hatches a few daring plans of his own to return safely home.

FINDING NEMO returns to theatres for the first time in 3D September 14th, 2012!

The Pound Puppies are a team of fearless dogs whose sworn mission is to find homes for lonely puppies. Even though they look like regular dogs, these pro-active pooches match up pups with loving families fulfilling the mantra of a pup for every person and a person for every pup—all while they keep the humans at Shelter 17 clueless. Sometimes dogs are dogs’ best friend!

The Pound Puppies series is currently airing on The Hub in the U.S. and YTV in Canada. The DVD release marks the North American home entertainment debut of Hasbro Studios’ hit show. 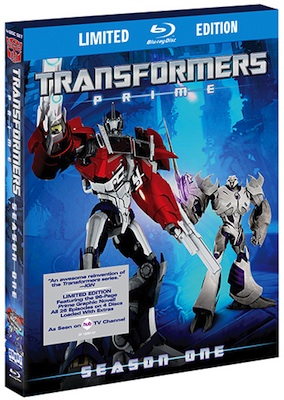 TRANSFORMERS PRIME: THE COMPLETE FIRST SEASON – OWN IT ON MARCH 6, 2012 FROM SHOUT! FACTORY

Prepare to experience the world of TRANSFORMERS PRIME like never before with perfect picture visuals and the purest digital sound available when the entire first season of the award-winning CGI animated series TRANSFORMERS PRIME arrives in stores everywhere in North America on March 6, 2012 in a deluxe 4-DVD set and a Limited Edition 4-Disc Blu-ray™ collection from Shout! Factory, in collaboration with Hasbro Studios.

Both the DVD and Blu-ray collections of TRANSFORMERS PRIME: THE COMPLETE FIRST SEASON boast all 26 action-packed episodes (including the 5-part miniseries Darkness Rising) and special bonus content. For a limited time only, TRANSFORMERS PRIME: THE COMPLETE FIRST SEASON Limited Edition 4-Disc Blu-ray contains a 96-page IDW graphic novel based on this hit series.

Delivering a new level of heavy metal action and family entertainment for all ages, the limited edition Blu-ray collection is priced to own at $64.99 SRP. The deluxe 4-DVD set is sold separately and has a suggested retail price of $ 29.93 SRP.

The TRANSFORMERS saga starts a new chapter as old foes return, legendary heroes rise, and new ones are found in unlikely places. The new EMMY Award winning series TRANSFORMERS PRIME, A Hasbro Studios production, currently airs on The HUB television network in the U.S. and Teletoons in Canada, deepens the epic mythology of both the AUTOBOTS and DECEPTICONS, while starting a new chapter for a new generation of fans

In early 2011, loyal TRANSFORMERS fans, as well as families and kids, were introduced to this visually stunning five-part miniseries on The HUB. Optimus Prime, Bumblebee, Arcee, AUTOBOT Ratchet, Bulkhead, and many others are back to “roll out” against Megatron’s latest attempt to conquer Earth. And Megatron proves to be more powerful than ever, having acquired a rare element that allows him mastery over life itself. OPTIMUS PRIME and the AUTBOTS may be few against the Decepticon hordes, but they find increased strength through bonds forged with three human teenagers.

The 6th film in the Buddies franchise stars everyone’s favorite talking canine superstars Rosebud, B-Dawg, Budderball, Buddha and Mudbud, as the pup pack journeys to mysterious Egypt in search of the greatest treasure known to animalkind, the legendary Cat’s Eye jewel, from the lost treasure of Cleocatra! Danger lurks around every secret sphinx, cryptic crypt and puzzling pyramid as Ubasti, a devious cat, schemes to possess the mystical jewel and use its powerful energy to rid the planet of all dogs! With help from new lovable friends Cammy, a baby camel – and a mischievous monkey named Babi – the gang and their new friends avoid booby traps, solve puzzles and explore a mysterious tomb in their most exciting and challenging adventure yet.

· “Roam” Music Video – A re-make of The B-52s song performed by Caroline Sunshine, Kenton Duty and Adam Irigoyen from the cast of the Disney Channel hit series “Shake it Up.”

Trying to figure out what you’re doing for Valentine’s Day this year? Why not share in the love and celebrate with a movie! Gather your family together and choose one of the top family rentals currently available at Redbox locations nationwide. Currently topping the charts this week are Dolphin Tale, Mr. Popper’s Penguins and The Smurfs.

Spread the love this holiday and share a Valentine’s e-card with your friends and family for a free rental on Valentine’s Day! Simply go to www.facebook.com/redbox and click on the link under the profile picture that says “Valentine’s” to share a free rental with your loved ones on February 14th.

Below, are the top rented family movies from 1/23-1/30. Find your nearest Redbox location by visiting www.redbox.com or via the Redbox iPhone® or Android mobile apps.