The product featured was provided free of cost to me for the sole purpose of product testing and review. Please note that any personal opinions reflected in this post are my own and have not been influenced by the sponsor in any way.

Some of the posts on this site may contain an affiliate link, which means I MAY get paid a small commission (and I do mean SMALL) if you purchase the product or service. 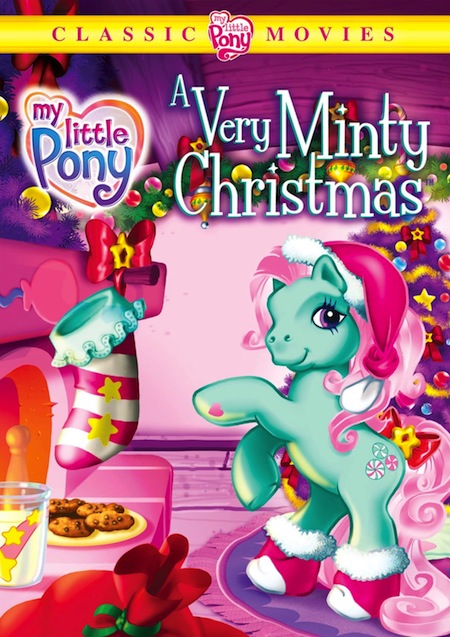 Clumsy, klutzy Minty accidentally breaks the candy cane beacon that lights Santa’s way to Ponyville. Trying to save Christmas, she decides to take Santa’s place and leave her socks, her most treasured things, under the ponies’ Christmas trees. Then not satisfied that she has done enough, she charts a course in an air balloon for the North Pole. Thistle follows her to help. Their balloon has an accident landing there. The other ponies find and save the pair; however, the ponies learn Santa is gone. Minty and her friends return home and enjoy the glow of Santa’s magic.

Some may consider A Very Minty Christmas pastel pony sweet fluff. That is the outside. The inside is a message of in the heart well meaningfulness and support. It shows values like taking responsibility, owning up, doing the right thing, giving back should not be mere cliches.

The feature My Little Pony, A Very Minty Christmas has a running time of 44 minutes. Its special features include bonus episode Dancing in the Clouds as well as sing-alongs That’s what I Love About Christmas and Nothing Says Christmas like a Pair of Socks.

Consider A Very Minty Christmas a special memories opp and great way to spread holiday cheer. With a $9.98 SMRP, it is available in retailers nationwide and online.

My name is Pat. and don’t forget that period. I am the mother of four children and grandmother of seven. I have an M. A. +30. As a public school teacher now retired, I have always been and always will be a child advocate. My interests in traveling, photography, camping, reading, writing, and doing volunteer work keep me on the go. I blog at hereandthere.us.