You are here: Home / Lifestyle / Retiring The Couch Means A New Bed For Dobby

A number of years back my parents gave us their living room set when they got a new one. It was an incredible set. It had a nice big couch, a chair that leaned back a bit (not a recliner though), and a loveseat futon. I have never in my life had or sat in such comfortable furniture. Sadly, the pieces really wore over the years. There were holes in the fabric on two of the pieces. Some of the cushions were so mangled that they wouldn’t stay in their right position. Reupholstering is an expensive option that we cannot afford. So, I bought some quilts on sale from zulily last year and used them as furniture covers. It wasn’t a real fix to the problem but it worked well enough for us.

I got a call the other day letting me know that one of my brothers was moving. He was getting some new furniture and offered us their couch and loveseat (shown below). He sent pictures to my phone of the two pieces. They were in nice shape. I talked to hubby and we agreed that as much as we would miss our big comfy furniture, it was time to retire it. The day came to move the two pieces. Both of the pieces fit into my Dad’s trailer so we were able to get them back to my house in one trip. We got home just as the sky was starting to look like it might rain.

Once back at the house the first thing that had to be done was to empty the old furniture. That set was real quality wood furniture which made it super heavy. Between four grown men – hubby, my Dad, and my son and his friend – the old furniture was out at the curb in no time, awaiting the bulk pickup the next day. Then it was time to get the new pieces in.

The two pieces we were getting were a deep dark brown pleather, so dark some think it’s black. I don’t know what the real term is for the material but basically it’s fake leather. The guys got it into the house and into place. The room looked so different, and quite a bit bigger. The furniture didn’t have any rips or tears and I didn’t want there to be any anytime soon so it was determined that Dobby would not be allowed on the furniture.

I knew that not being allowed on the couch would be an adjustment for Dobby. We still have his crate because he’s a very enthusiastic jumper so I decided to get him a new bed for it. I found a really nice deal on a reasonably thick crate mattress at Boscov’s. 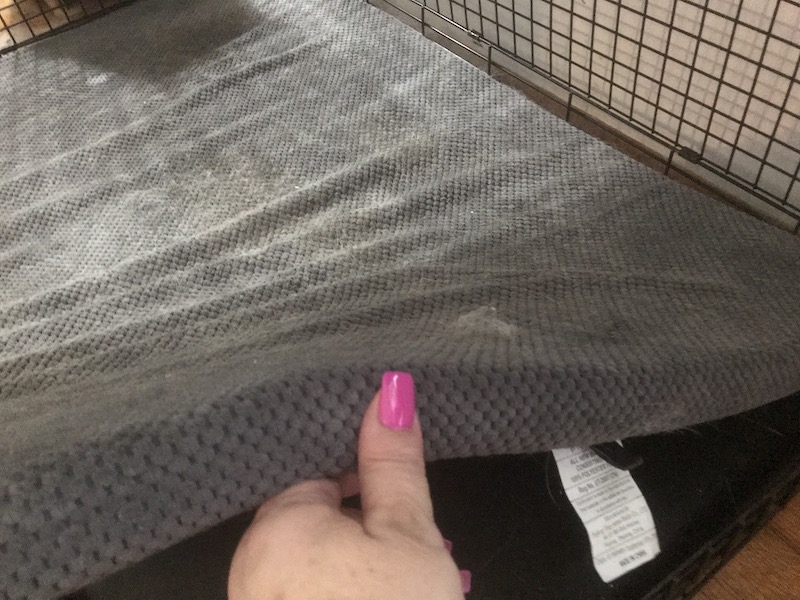 With more space in the living room, I moved the crate to the front wall of the house near the windows, where our big comfy chair used to be. My next step is to look into some furniture covers.

Dog owners – do you let them up on the couch?