You are here: Home / Reviews / REVIEW – In-Lawfully Yours DVD

The product(s) featured in this post was provided free of cost to me for the sole purpose of product testing and review. This post has not been monetarily compensated. Please note that, as always, any personal opinions reflected in this post are my own and have not been influenced by the sponsor in any way. 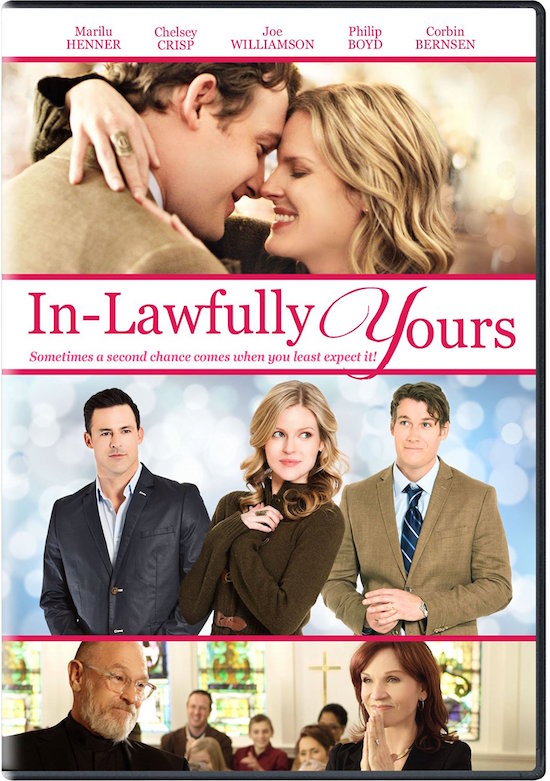 In Lawfully Yours was made in partnership by Home Theatre Films, the producers of Christian Mingle, and Regent University’s School of Communication & The Arts, recipient of more than 400 film awards, including first place for comedy in the 2016 College Television Awards.

The cast is an all star cast with Chelsey Crisp (“Fresh off the Boat”), Marilu Henner (“Taxi,” “Brooklyn Nine-Nine”) and Corbin Bernsen (“LA Law”, “Psych”, Major League) along with Philip Boyd (“Tyler Perry’s The Have and the Have Nots”) and Joe Williamson (“Grey’s Anatomy”).

The story is sweet, funny and sometimes serious. There is romance, betrayal, friendship, and coming to faith. Jesse is the main character, a bubbly New Yorker who is cheated on and eventually divorced by her husband. That doesn’t keep her from helping her recently widowed mother in law pack up her belongings to move. Jesse and the mother in law become very close. It is at Mom’s church that Jesse does some funny things, not knowing at all how to act in church! She and the widowed pastor become good friends and begin to fall in love when everything goes haywire!

I am not going to share anything else, so I won’t spoil the plot for you! You’re just going to have to get yourself a copy and find out for yourself what happens!

I would use caution in showing this to young teens or kids. There is a scene where Jesse catches her husband in bed with another woman and although everyone is covered by a towel or shirt, you know what happened and Jesse talks about it several times. Jesse also makes inappropriate jokes with the pastor and his congregation about not “sleeping” with him.

I enjoyed the movie, It was a sweet story and done well. I was impressed that University students helped make this movie and that it was written by one of their professors.

You can buy this DVD online at Best Buy and major Christian bookstores for $14.99

Pamela is an RN with her Master's in Nursing Education. She is a part time Nursing professor and teaches Health at a local private school. She has 6 awesome kids, 3 of whom are married, and one grand daughter, baby Ava Grace. She loves to write, read, garden and travel all over the world as a Missionary Nurse. She has been married to her best friend, Steve, for 32 years. Pamela is also a contributor for Bella Savvy.