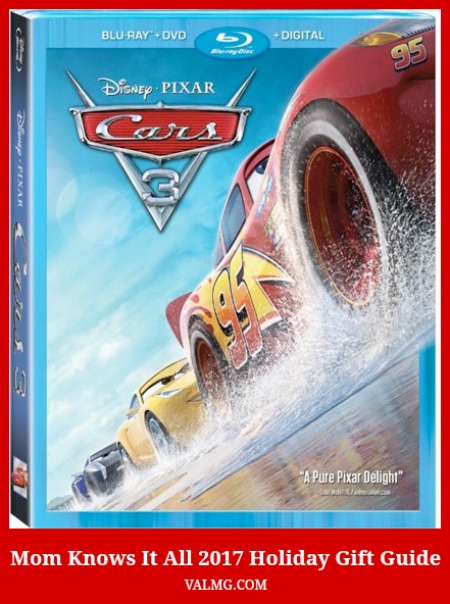 The product(s) featured in this post was provided at no cost to me. This post has not been monetarily compensated. Please note that, as always, any personal opinions reflected in this post are my own. Some of the posts on this site, like this one, contain an affiliate link. This means I MAY get paid a SMALL (and I do mean small) commission IF you purchase the product or service.

Cars is one of my youngest son’s favorite movies so I was particularly excited to be able to watch this with him. Cars 3 didn’t disappoint, but to be honest we still love the first one so that’s no surprise. If you’ve seen the previous installments of this movie series you must add this to your collection. The story is great, I love that it reflects on competitors facing their retirement anddoing things their own way, as well as placing a female into a position typically occupied by men.

From Disney-Pixar, creators of FINDING DORY and Academy Award(R) winner INSIDE OUT (Best Animated Feature Film, 2015), comes an epic adventure packed with heart, hilarity and full-throttle FUN! Blindsided by a new generation of blazing-fast racers led by arrogant hotshot Jackson Storm, the legendary Lightning McQueen (Owen Wilson) is suddenly sidelined and pushed from the sport he loves. To get back on track, he’ll need the help of eager young racing technician Cruz Ramirez, inspiration from the late Fabulous Hudson Hornet and a few unexpected twists and turns of fate. Bring home the high-octane hit that’s fully loaded with unforgettable characters and spectacular animation!

This clip is called “The Next Gens”.

This clip is called “Not A Fan”.

This clip is called “Fading Fast”.

Here’s some of the Easter eggs from the film.

“Cars 3” is Disney•Pixar’s first in-home title released in stunning 4K Ultra HD format, the next-generation viewing format with four times the resolution of HD and exceptional high dynamic range (HDR), resulting in brilliant highlights, vibrant colors and greater contrast on compatible displays than ever before. With 4K Ultra HD, viewers will feel like they’re at the center of the action—holding their breath during the dramatic crash that launches Lightning’s journey, feeling the pulse-pounding action at the Florida International Super Speedway, and getting down and dirty at the Crazy 8 demolition derby.

5 – As “Cars 3” gets underway, world-champion racer Lightning McQueen is riding high with five Piston-Cup wins under his hood.
11 – Lightning McQueen raced into moviegoers’ hearts 11 years ago—making his rookie debut in “Cars” in March 2006—and remains an iconic character today.
24 – The dramatic, slow-motion crash scene in which Lightning McQueen hits a wall and rolls several times takes 24 seconds.
95 – Lightning McQueen still sports the dynamic #95 with his signature lightning-bolt graphics. He displays five distinct looks in “Cars 3,” including one that pays homage to his original paint, a primer look he gets following the devastating crash, a custom wrap ordered by Sterling, and more.
198 – Lightning McQueen tops out at a speed of 198 miles per hour on his last lap with Cruz Ramirez on Fireball Beach. But Lightning’s nemesis—next-gen racer Jackson Storm—races at speeds pushing 207 mph.