This post was written by Mom Knows It All contributor Stefany T. Stefany is an RN turned stay-at-home mom. When she is not catering to the every whim of her 3 children, dogs, cat, and small animals, Stefany enjoys reading, writing, watching her children play sports, and being a virtual assistant to other bloggers. Stefany has been blogging at ToBeThode since 2008.

The product(s) featured in this post was provided to me free of cost to me for inclusion in the holiday gift guide. This post has not been monetarily compensated. Please note that, as always, any personal opinions reflected in this post are my own. 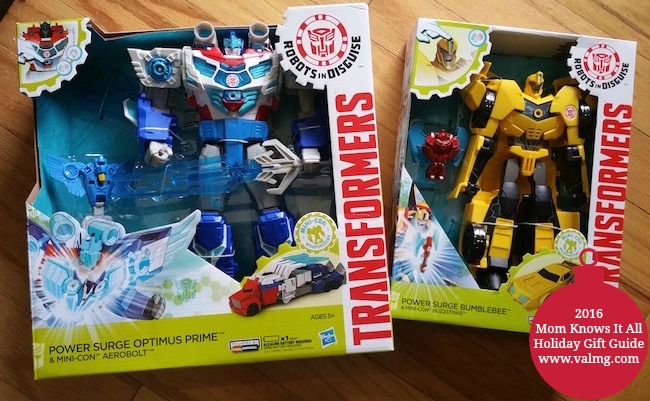 PURCHASE from the HasbroToyShop online store

Boys love to make things move and work. Any toy that Johnny gets, he finds a way to take them apart and put them back together. This is part of the reason I love Transformers so much. He gets to do what he enjoys, disassemble toys, while enjoying that the toy is meant to be used that way. You see, Transformers truly do transform with the help of your child!

Johnny received two Transformers: Robots In Disguise and has been playing with them ever since. He said immediately that they are “totally sick” which, in kid terms, means they are really great! He grabbed the boxes and tore into them right away and then started the process of making the Transformers transform from robots to vehicles and back again. He has had hours of fun with these two toys and, for that reason, I think these are the perfect toy for the holiday season. Your child will truly enjoy that the Transformers are made to be two things… a robot and a vehicle! They are “Robots in Disguise”!

Some of the Transformers are for younger children and some are for older kids so be sure to check age suggestions if you go shopping for these amazing toys. You can rest assured that kids will love them!

About Mom Knows It All Contributor

This post was written by Mom Knows It All contributor Libby.

Wearer of many hats…Libby is a wife, mother, grandmother, daughter, friend, activist. Married to her knight in shining armor for over 45 wonderful years, together hey have 10 grown children, 26 growing grandchildren, and are anxiously awaiting the birth of their first great grandchild. Disabilities do not define her...they give her cause to find new ways to do things. Libby is looking forward to partnering with a new Service Dog soon. She can be found blogging at Beautiful Touches and The Crazy Pet Lady.