Some of the posts on this site, like this one, contain an affiliate link. This means I MAY get paid a SMALL (and I do mean small) commission IF you purchase the product or service. 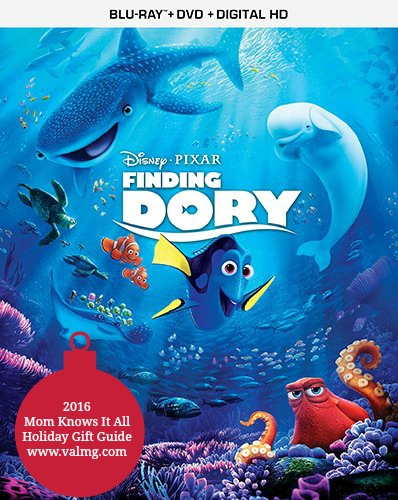 I loved the movie Finding Nemo. When I first saw the announcement of the movie Finding Dory I wondered if it would be half as good. I mean, so many “follow-up” or “part 2” movies just aren’t as good as the first. I am so pleased to say that Finding Dory didn’t disappoint at all. It’s different than Finding Nemo but in good ways. It’s fun and heartwarming and makes a great family movie. Here’s a full description of the product.

From the Academy Award(R)-winning creators of Disney-Pixar’s FINDING NEMO (Best Animated Feature, 2003) comes an epic undersea adventure filled with imagination, humor and heart. When Dory, the forgetful blue tang (Ellen DeGeneres), suddenly remembers she has a family who may be looking for her, she, Marlin (Albert Brooks) and Nemo (Hayden Rolence) take off on a life-changing quest to find them…with help from Hank, a cantankerous octopus; Bailey, a beluga whale who’s convinced his biological sonar skills are on the fritz’ and Destiny, a nearsighted whale shark! Bring home the movie overflowing with unforgettable characters, dazzling animation and gallons of bonus extras!

Here’s one of the original trailers.

And here’s a bonus clip called Power To The Octopuses.