You are here: Home / Entertainment / Disney Pixar’s Coco On Blu-ray And DVD

Disney Pixar’s Coco is the story of a 12-year-old aspiring musician’s extraordinary journey to the magical land of his ancestors. The critically acclaimed animated film celebrates the importance of family, honoring your ancestors and following your dreams, and includes extensive extras for the whole family. 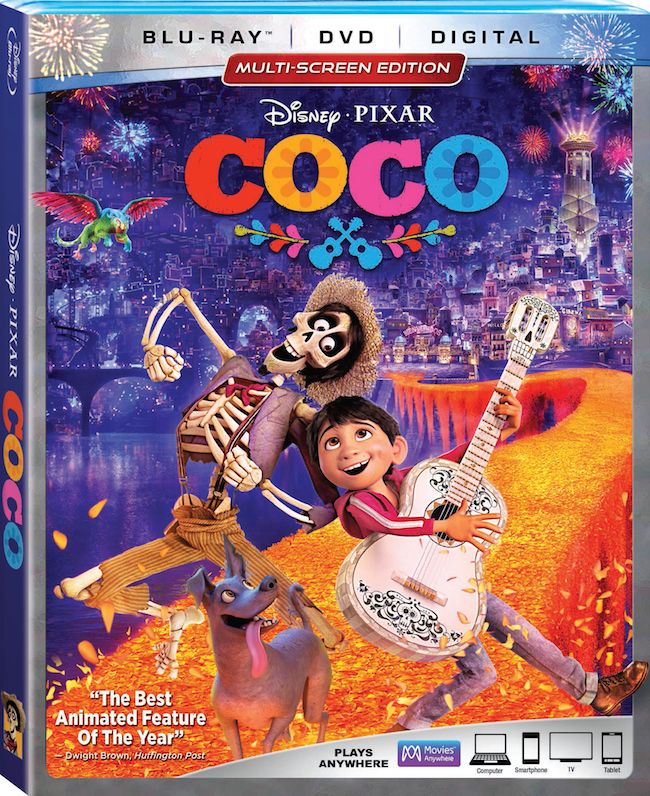 Coco is a fun and colorful movie with a great story of family, legend and culture behind it. As is the case with the majority of Disney Pixar movies I’ve seen, the graphics and animtion are terrific.

In Disney•Pixar’s “Coco,” Pixar Animation Studios’ 19th feature film, Miguel (voice of newcomer Anthony Gonzalez) dreams of becoming an accomplished musician like his idol Ernesto de la Cruz (voice of Benjamin Bratt)—despite his family’s baffling generations-old ban on music. Desperate to prove his talent, Miguel finds himself in the stunning and colorful Land of the Dead following a mysterious chain of events. Along the way, he meets charming trickster Héctor (voice of Gael García Bernal), and together, they set off on an extraordinary journey to unlock the real story behind Miguel’s family history.

The voice cast of “Coco” includes characters from the Land of the Living and the Land of the Dead. From the Land of the Living, Anthony Gonzalez (“Ice Box,” TNT’s “The Last Ship”) lends his voice to Miguel, Renée Victor (“Weeds,” “The Apostle”) provides the authoritative voice of Abuelita, and Jaime Camil (CW’s “Jane the Virgin,” Disney Junior’s “Elena of Avalor,” “The Secret Lives of Pets”) is the voice of Papá. Lombardo Boyar (“Happy Feet,” TNT’s “Murder in the First”) voices a town mariachi, and Ana Ofelia Murguía is the voice of Miguel’s cherished great-grandmother Mamá Coco. Sofía Espinosa (“Gloria”) provides the voice of Miguel’s loving Mamá, and Luis Valdez (“Which Way Is Up,” director “La Bamba” and “The Cisco Kid”) lends his voice to Tío Berto, Miguel’s hardworking uncle.

Here are some bonus clips.

“The Way Of The Riveras” – Deleted Scene

“You Got the Part” – Featurette Clip

Deleted Scenes with Introductions – Director Lee Unkrich and co-director Adrian Molina talk about the deleted scenes and the part they played in the development of “Coco.”
Día de los Muertos – In this musical extravaganza, the colors and excitement of Día de los Muertos come to life as we meet superstar Ernesto de la Cruz.
The Way of the Riveras – A musical number in which Abuelita and Miguel prepare their Día de los Muertos celebration while she teaches him Rivera family history and traditions.
Celebrity Tour – Héctor, a Land of the Dead tour bus guide, agrees to help Miguel, revealed to be a living boy, on his quest to find de la Cruz.
The Bus Escape – The Rivera family catches up to Miguel and Héctor and attempts to halt their mission to find de la Cruz.
Alebrije Attack – Miguel and Héctor are interrupted on their journey to find de la Cruz by a fierce alebrije.
The Family Fix – After de la Cruz reveals his true colors, the Rivera family puts their dismay aside and comes together to repair the smashed guitar needed to send Miguel home.
To the Bridge – As the Land of the Dead counts down to the end of Día de los Muertos, Miguel and de la Cruz come head-to-head on the marigold bridge.
Filmmaker Commentary – Presented by Lee Unkrich (director), Adrian Molina (co-director) and Darla K. Anderson (producer).
The Music of “Coco” – Collaborating with musicians of Mexico and some unique instrumentation, this documentary explores the beautiful fusion of music essential to the story of “Coco.”
Paths to Pixar: “Coco” – Explore how the film crew’s personal stories resonate with the themes of the movie itself.
Welcome to the Fiesta – A musical exploration of the skeletons that make the Land of the Dead in “Coco” so wondrous and intriguing.
How to Draw a Skeleton – Pixar artist Daniel Arriaga gives a lesson on the quick and easy way to draw skeletons using simple shapes.
A Thousand Pictures a Day – Join the “Coco” crew on an immersive travelogue through Mexico, visiting families, artisans, cemeteries, and small villages during the Día de los Muertos holiday.
Mi Familia – Developing the Riveras was a labor of love that took the cast and crew on a deep dive into the meaning of family.
Land of Our Ancestors – Watch Pixar artists lovingly construct layer upon layer of architecture from many eras of Mexican history, bringing the Land of the Dead to life.
Fashion Through the Ages – The cast of characters in “Coco” are from many different eras, making for some magnificent costuming opportunities.
The Real Guitar – The majestic guitar that spurs Miguel on his journey through the Land of the Dead is a unique creation. Watch as it is initially designed by a Pixar artist and ultimately realized as a real instrument by a master luthier in this poetic ode to craftsmanship.
Dante – How the crew fell in love with the uniquely Mexican breed of Xoloitzcuintli (or “Xolo”) dogs that inspired Dante.
How to Make Papel Picado – Join Pixar artist Ana Ramírez González as we learn how papel picado is made traditionally, and then try your own approach to this beautiful art form.
Un Poco “Coco” – A montage of original animated pieces used to promote “Coco.”
“Coco Trailers” – Trailers include “Feeling,” “Dante’s Lunch,” “Destiny,” “Journey” and “Belong.”