The product featured was provided free of cost to me for the sole purpose of product testing and review. Please note that any personal opinions reflected in this post are my own and have not been influenced by the sponsor in any way. 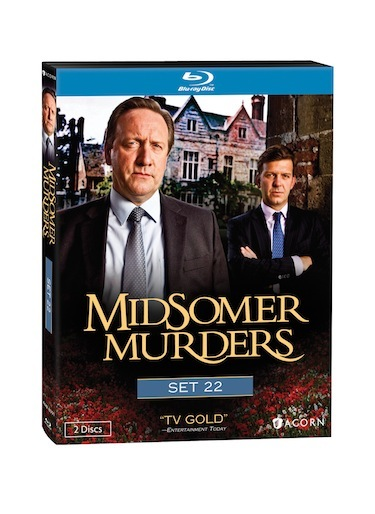 Mystery is my favorite genre–be it novel, play, movie, TV show, or DVD. I cut my teeth on Doyle’s detective Sherlock Holmes then went on to read every one of best-selling novelist of all times Dame Agatha Christie’s fictional crimes. Their quaint English characters, picturesque countrysides, and sinister secrets were the perfect mix for MURDER. So when I was asked if I would enjoy reviewing Acorn’s British hit mystery series Midsomer Murders, Set 22 never broadcast in the U. S., how could I refuse?

Over the last few evenings, hubby and I relaxed and enjoyed The Sleeper under the Hill, The Night of the Stag, A Sacred Trust, and A Rare Bird (each approx 93 minutes in length) as well as a bonus 34 minute Midsomer Murders in Conversation segment. These four stand alone mysteries do not follow any predictable formula plot, are not gritty, realistic or gory, and are devoid of sex and profanity. Instead they rely on old world detective work, no appreciable forensics, and subtle clues like stolen trousers, a piece of art, business papers, and an excavated artifact, to piece together each killer’s identity.

Set in a peaceful rural environment, Midsomer County is a bloody place. DCI John Barnaby (Neil Dudgeon) and Detective Sergeant Ben Jones (Jason Hughes) do not often rely on formal police procedure, search warrants, statements of rights. They observe and get into the thick of things to learn the truth of Druids in Midsomer Mow, local bootleggers and death tainted cider vats, vandalism and murder at Midsomer Priory, and feathers dividing the Midsomer-in-the-Marsh Ornithological Society.

Based on the writings of Caroline Graham, each Midsomer Murder is longer in length than those of most detective story episodes. This allows for realistic buildup and exposition of details as each plot slyly builds to its conclusion. Characters are well cast and provide good drama.

Along with being able to purchase from Barnes & Noble on BluRay or DVD.

My name is Pat. and don’t forget that period. I am the mother of four children and grandmother of seven. I have an M. A. +30. As a public school teacher now retired, I have always been and always will be a child advocate. My interests in traveling, photography, camping, reading, writing, and doing volunteer work keep me on the go. I blog at hereandthere.us.