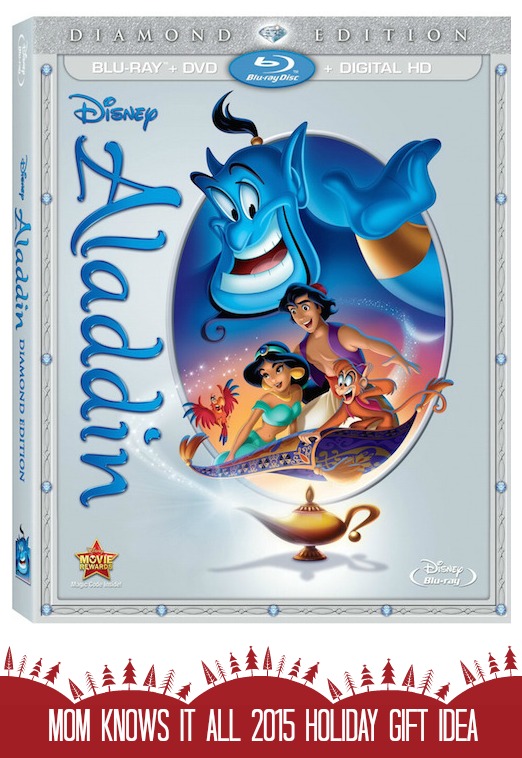 I love Disney animated movies. I grew up watching them and now love to watch them with my family. I remember the first time I watched the movie Alasdin, and how magical I thought it was. It had humor and a little action, and of course love. It had the talented Robin Williams in it, a brilliant actor that I always loved and appreciated even more watching the movie again now that he’s gone. Whether you’ve seen Aladdin numerous times like me, or are watching it for your first time, this movie is a must have addition for those that love Disney animated movies.

Disney’s beloved masterpiece will make your heart race and your spirit soar. Experience the laughter, adventure and Academy Award®-winning music (1992: Best Music, Original Song, “A Whole New World,” Original Score) for the first time on Blu-ray and Digital HD. And now Aladdin shines even brighter with never-before-seen tributes to the enchanting talent of Robin Williams, the “Genius behind the Genie.”

Voice Cast: Robin Williams (Jumanji, Night at the Museum) as The Genie, Scott Weinger (TV’s “Full House”) as Aladdin, Linda Larkin as Jasmine, Gilbert Gottfried (TV’s “Saturday Night Live”) as Iago, Jonathan Freeman (Aladdin: the Musical on Broadway) as Jafar, Douglas Seale (Rescuers Down Under, For Love or Money) as Sultan and Frank Welker (Mulan, The Smurfs 2) as Abu.

Genie 101 – Our host, Scott Weinger (the voice of Aladdin), takes us through the various transformattions of the famous (and formerly famous) celebrity references of the Genie.

Ron & John: You Ain’t Never Had a Friend Like Me – Directors John Musker & Ron Clements sit down and discuss the experiences of their long-running partnership together at Disney.

Aladdin: Creating Broadway Magic – Join host Darren Criss as we take “a new fantastic point of view” at the story of how Aladdin went from a classic Disney animated film to become Broadway’s smash hit with Composer Alan Menken and others.

Classic Bonus – ALL classic bonus from the original DVD release