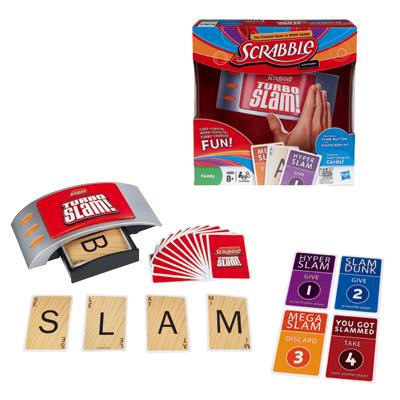 SCRABBLE TURBO SLAM is a game of fast and furious word building. Borrowing elements from the classic crossword game, Scrabble Turbo Slam offers laugh-out-loud fun for the whole family. Speed is the name of the game as players race to create four-letter words and get rid of their cards as quickly as possible.

This is definitely faster paced than Scrabble Slam. Scrabble Slam is played with cards as well, but the gameplay is not controlled by the electronic device. I dd notice that it was much more difficult for my son to cheat and win, which I appreciated. The game is pretty fun, the sound effects can be funny.

The product(s) featured in this post was provided free of cost to me for the sole purpose of product testing and review OR inclusion in a gift guide. This review has not been monetarily compensated. Please note that as always any personal opinions reflected in this post are my own and have not been influenced by the sponsor in any way.